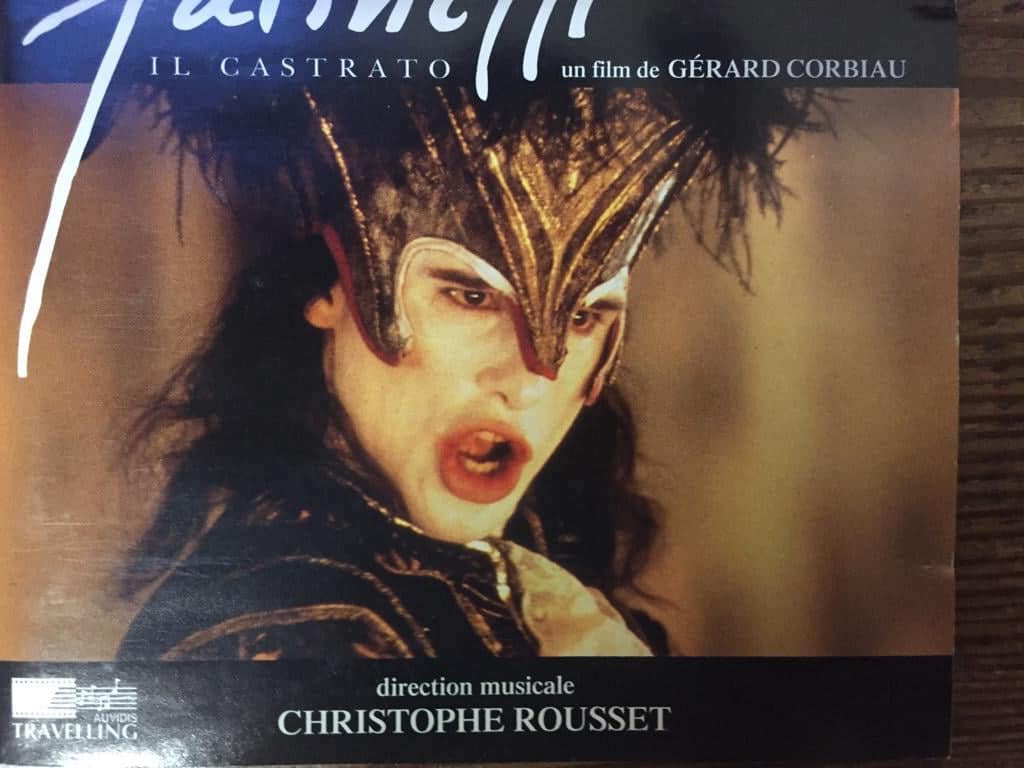 The possibility of a Castrato character has been mentioned. This is an image brought along for inspiration.

The energy was tangible, the whole room buzzing; seventeen actors together, Julian for moral support, the DJ coming for the first time to have a look, see what was going on, actors returning from holidays, or other commitments; the Troupe almost at full complement.

Once everyone said hello, we began the warm up –– it was great, focused, bringing everyone together; flowing, moving, standing, on the floor, all around the room.

After this, the actors moved into pairs and did a new mirroring exercise, moving side to side, whithout leading or following, without verbal cues. It was interesting that, although there has been a lot of work on mirroring, the different instructions here made it seem like an entirely new experience, where the actors had to start again to be sensitive / aware enough of the other actor, for it to work.

I gave feedback immediately after this exercise and I regretted that I did. Timing is everything, I find, and in this circumstance, it was too early in what was a group, including myself, that was  renewing contact with one another,  And then, after all, ‘It is all my fault!’ (see the Amadeus Project: Day 3).

We sat in a circle and massaged the neck of the person in front. The groans and moans that resulted were loud and laughter ensued. When our group has unlimited funds, I will offer everybody in the crew a massage! Wouldn’t that be amazing?

In an ideal world, I would begin every workshop with a dedicated time for yoga or dance or movement –– to make sure the whole body is entirely responsive to the demands of the work.

Maybe, as this is an ideal world, the weekly massage can be added in too!!

The laughter continued as we tried another game. The actors remained sitting on the chairs, with their arms placed on the shoulders of the person in front and eyes closed. Then one person in the circle makes a gesture and this gets repeated around the circle. It was too much to ask. The patience and quietness required to wait for the gesture became unbearable and the game finished early.

Time to grab the night by the scruff of the neck. Back to the walks. There was a swift instruction to those less familiar with the walks on: character, intensity and warning that I would be jumping in and out of the exercise.

I needed to bring the focus back to the work.

Actors familiar with it are now totally on top of this development work. I asked questions of them, reconfirmed their connections with the other character they are paired with, checked in with each person to find their place at this part of the rehearsals. Some are still finding a definite role. But that’s not a concern, just part of the enquiry. For people returning, it’s a matter of engaging in as relaxed and as playful a way as possible, trusting that the process will work.

We looked again at playing with gender, trying different ways of being as a man or woman; being a larger version of the character, them a shadow –– a cardboard cut-out; not tying into a definitive character at this point, but exploring constantly.

When that individual work was done, I moved on to another trial. Following the workshop on The Amadeus Project: Day 9, where I had been frustrated in communicating my intention to the Troupe (due to my own lack of clarity), I have been letting the difficulty sit in my brain, without worrying it. During the week, the idea of a line of actors, attached to each other by an imaginary elastic band, came to mind. The movement of the actor then depends on where they are in that line and who is leading, a continuous gap being maintained between each actor.

There is a combination of the One Moves, All Moves game in this new development as well as the Magnets game.

In this instance the two lines were led by the Venticelli, with their individual followers walking behind. The flow and movement of this exercise was great –– unexpected.

(I also tried some more flocking, to remind us all of what that was like for the two Venticelli groups.)

A little bit of colour

Before we moved on, Julia brought a bundle of scarves from which each character could chose one and put it on themselves. The idea was to consider how this character might decorate their clothing –– use the fabric as a necktie, or scarf, whatever their fancy dictated.

Image of power with Emperor Joseph

As we had done in The Amadeus Project: Day 10, we created an Image of Power, this time with Emperor Joseph in the central seat. Again, the actors use this to figure out their characters’ place in the society that is our reflection of that 18th Century world.

It is fantastic to have the actors playing the roles of the people in the upper echelons of this community all together, it gives a real sense of the flamboyance and the intrigue of any grouping playing with power; and, of course, the potential for and foretaste of the final display of our production of Amadeus. 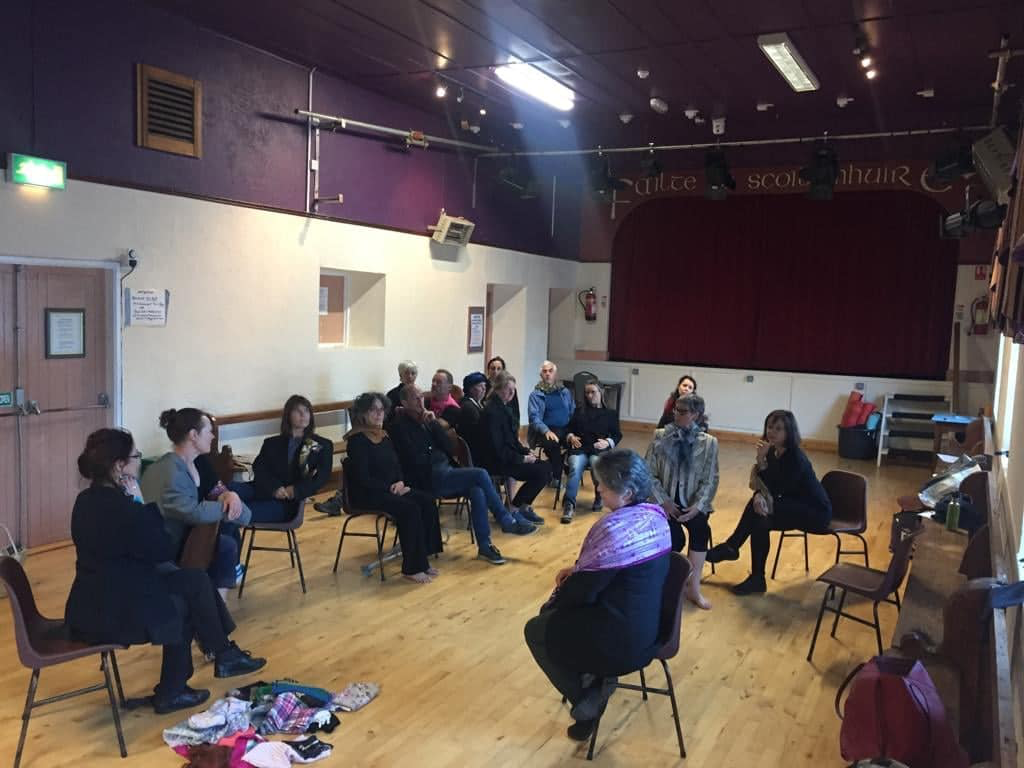 As we moved on to look at the text, I began by having a parade of those involved in Scene 3: Emperor Joseph, Salieri, Orsini Rosenberg, von Strack, Van Swieten, the Priest, all arriving in an elastic band line, as we had done before. The actors stopped and waited, twirled, regarded around them, moved forward, found a place in the set. Fab!

There are moments here and later on: an actor’s turn to leave, a look, a way of saying something. It seems settled, makes sense. Only the first scraping away at the material that will be sculpted away into the final offering.

Sometimes I view what I do as sculpting … paring way together at the material until we reveal the essence … or is it by adding on until the last piece of clay is fixed and, thumbprint by thumbprint, the final form is reached?

Then on to the Salieri and Venticelli scene, this time they will do it alone, without the rest of their group with them. Another sense of characters and the play moving forward with brio and style; playing again with the two Salieris and how they might possibly interact. (Though the elder Salieri has less to do tonight. We plan to meet later in the week, so that will be the time to work this out with them.)

The final piece of text worked on was the piece we had done last week with the younger Salieri, the Venticelli and their two groups. This just rocked in impact. 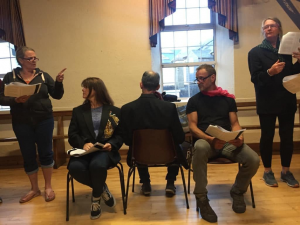 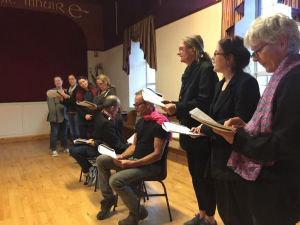 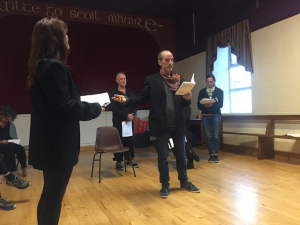 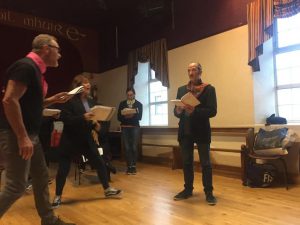 The rehearsals are lengthening, so people are keen to head away and not to linger. But a final coming together is really nice … and important. We created a group and simply paused for a moment before leaving, arms around each others’ backs, reflecting on the positive evening and dealing with administrative stuff –– meeting in the week for the Salieris, Mozart and Constanza the priority next week along with the ‘big meeting’ with the Design Team.

Julia shared a lovely mood board and everyone will try to wear something in that colour palette for a photo to use for publicity next week. When we were planning this during this week, I had mentioned to her that I was really ready for some colour, I’m tired of black. We have a photographer coming to take the shot, so that’ll be good.

And I’ll contact the DJ to see how he’s fixed with the music … hopefully the process wasn’t too fear-inducing for someone uninitiated in the ways of this production!

A fine chat with the Venticelli about their characters and we were finished for the evening.

Hi all of the Amadeus Troupe, Designers and production team,
To the Amadeus Troupe, great rehearsal last night. It feels like all those steps we have been working on are leading us in the right direction. Loads of wonderful moments, from characters all over the room.
Julia has asked me to send you the message below in preparation for a larger gathering on Monday night, 17th June to have a little look at costumes. It’s not a full costume night, just inspiration for the Designers’ continued work and a big gathering before we finish for the summer.
We’ll use the Annie Leibovitz shot again. Remembering which actor you copied, if you could do some homework checking the positioning and tone of the body language in detail it would be great.
There will be tea and better biscuits on offer also!
Should be great fun.
Karen x
From Julia:
Next Monday the designers will be joining us for a short period.  We would really like for them to get to know you, and more importantly,  your character! I think we will incorporate tiny ‘interviews’ into the warm up walking, nothing major just a few questions which the designers will be coming up with.   To that end could you give it some thought over the next few days, think a little about who you are, what your likes/dislikes are, what you reckon your habits are, that kind of thing.  We will also get in a photographer to take some photos that we can use for PR, so wear/bring anything in the red/orange/pink colour palette, obviously it would be amazing if you have/found/borrowed something that your character would wear but don’t stress it! Accessories would be good too, maybe an umbrella, hat or bags etc. Not vital but maybe stick to as gender neutral as possible, the odd dress/skirt would work but not too many of them!